An Enquiry into the Nature of Liberation

Bhaṭṭa Rāmakaṇṭha’s Paramokṣanirāsakārikāvṛtti, a commentary on Sadyojyotiḥ's refutation of twenty conceptions of the liberated state (mokṣa) 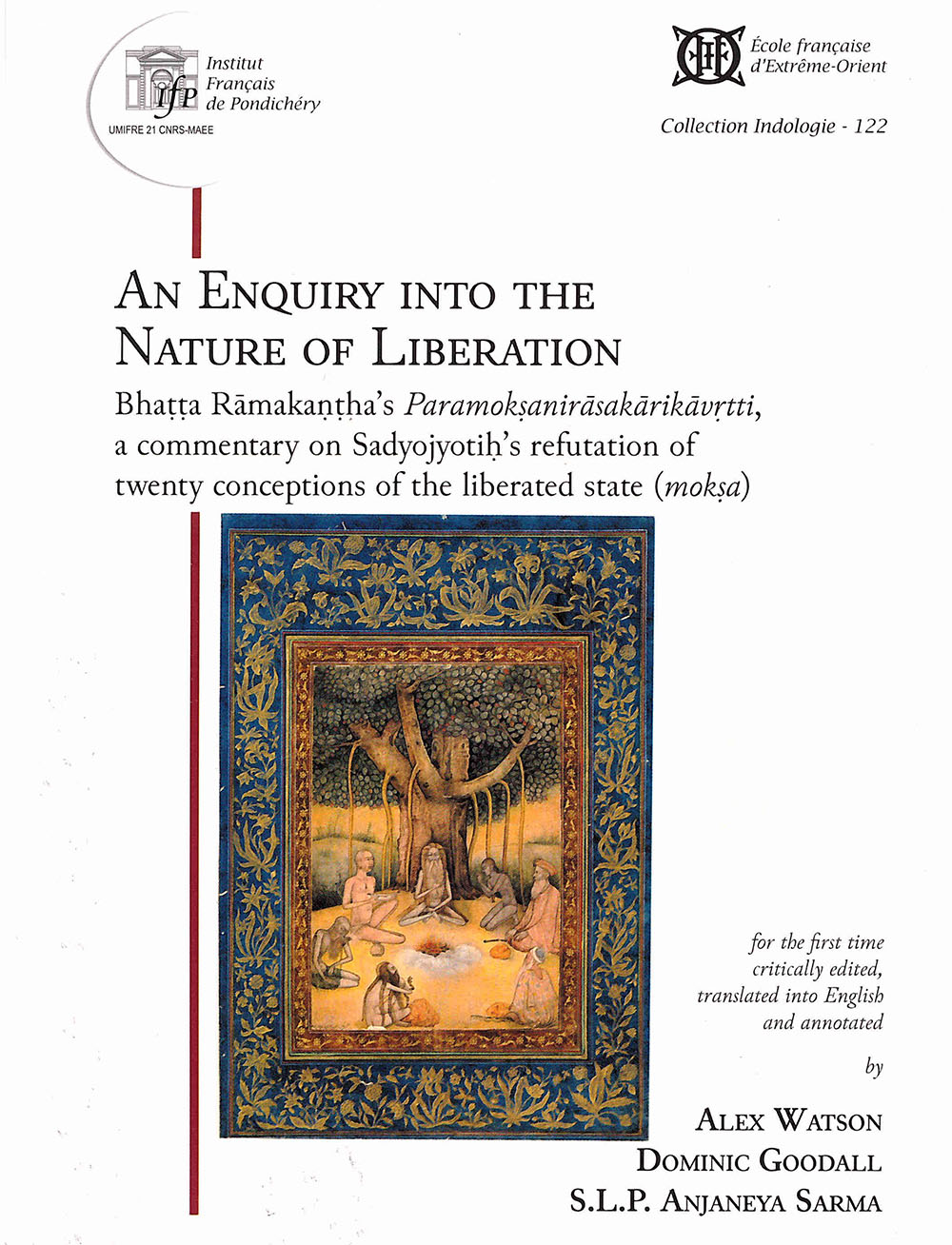 This book presents a short philosophical treatise in which twenty rival theories of the liberated state (mokṣa) are introduced and countered, and a long, discursive commentary that explores and develops the arguments that the treatise advances or implies. The original treatise comprises fifty-nine Sanskrit verses composed by Sadyojyotiḥ (c. 675–725 AD), the earliest named Śaiva philosopher of the Mantramārga of whom works survive. The commentator, Bhaṭṭa Rāmakaṇṭha (c. 950–1000 AD), was a Kashmirian whose writings systematised the doctrines of the classical Śaiva Siddhānta, for some centuries the dominant school of tantric Śaivism. Presented here is a first critical edition of these interlinked works and a richly annotated English translation. A lightly annotated introduction lays out clearly the ideas that the edited texts expound. Their study casts light not only on the history of Śaiva thought, but also on a number of religio-philosophical doctrines for which little other testimony survives.

S. L. P. Anjaneya Sarma was born in a traditional family in Andhra Pradesh. His primary education in Sanskrit was given by his father Brahmaśrī Śriṣṭi Śrī Rāmaśarmā and later on by his paternal uncle, Brahmaśrī Śriṣṭi Sāmbamūrtiśāstrī, who taught him advanced Sanskrit with special reference to grammar (vyākaraṇaśāstra) and poetics (alaṃkāraśāstra). He continued his studies at Andhra University where he obtained his Master's degree in 1970 and completed his Ph.D. in 1987. Later in his life he remained true to the traditional education: he studied advaitavedānta under the guidance of Brahmaśrī R. Kṛṣṇamūrtiśāstrī and Brahmaśrī Maṇidrāviḍaśāstrī, and is currently undergoing formal training in mīmāṃsā (bhāṭṭamīmāṃsā) under Brahmaśrī K. Rāmasubrahmaṇyaśāstrī. He has acquired formal titles of "Vyākaraṇavidvat" from Śrī Veṅkateśvaraveda-śāstra-āgamavidvat-sadas, Tirupati, in 1982 and "Vedāntaśāstra-viśārada" from Śrī Jagadguru Śaṅkarācārya of Sringeri in 2001.

He joined Matrusri Oriental College, Jillellamudi, Guntur (Dist.) A.P, as a Lecturer in Sanskrit in the year 1971 where he taught grammar (vyākaraṇa), literature and poetics for 16 years. Many of S.L.P. Anjaneya Sarma's students have benefitted from the depth of his knowledge, so that, for example, one of them was honored with the title "Vyākaraṇavidvatpravara" by Śrī Jagadguru Bharatītīrtha Śaṅkarācārya of Sringeri in 2005.

He joined the Pondicherry Centre of the École française d'Extrême-Orient (EFEO), as a Chargé de recherche (research fellow) in 1987 and has since then been actively involved in the research activities carried out at the centre as an independent scholar as well as in collaboration with other researchers. During the first two years of his service, S.L.P. Anjaneya Sarma contributed to the preparation of Pāṇinīyavyākaraṇodāharanakośa. In the following years he was employed in collaborative research within the framework of the program "Indian Analysis of the Sanskrit Language and Literature", led by Professor F. Grimal, the then Head of the Pondicherry Centre of the EFEO. This research resulted in the publication of critical editions and studies of two major commentaries on classical Sanskrit plays of Bhavabhūti: Vīrarāghava's commentary on Mahāvīracarita (published in 1999) and Harihara's commentary on Mālatīmādhava (published in 2005). In collaboration with Professor Grimal he has been working on the preparation of a critical edition and translation of Kāvyadarpaṇa, a literary work by Rājacūḍāmaṇidīkṣita, as well as on several publications within the newly founded series "Vyākhyānamālā", the first volume of which (Sarma and Grimal [2013]) has been recently published. His current research includes a critical edition of Tripathagā, a commentary on Nageśa's Paribhāṣenduśekhara. As an independent researcher S.L.P. Anjaneya Sarma has focused his attention on the study of different aspects of traditional Indian grammar and published two major monographs and a great number of articles in this field (see the publication list below).

Throughout his long career at the EFEO, Pondicherry, Dr. S.L.P. Anjaneya Sarma has continuously been a source of knowledge and inspiration for a wide range of scholars (from students up to the most advanced researchers) coming to Pondicherry from different parts of the world to seek his assistance. Dr. Sarma has also been invited to teach courses at the Indological departments of two European Universities: École Pratique des Hautes Études in June 2011 (lecture-series "Readings in the Bhāmatī and in other commentaries of the tradition of philosophical Vedānta") and University of Hamburg in 2014 ("Intensive Course on Indian Grammar and Poetics").

Throughout his scholarly career Dr. S.L.P. Anjaneya Sarma has remained deeply rooted in the traditional scholarship. He has attended numerous traditional scholarly debates (vākyārthasadas) in different parts of India, such as Madras, Tirupati, and many more. Since 2010 he has been acting as the examiner in vyākaraṇaśāstram at Sri Kanchee Veda Vedantha Sastra Sabha in Tenali, Guntur Dist. (A.P.), an annually conducted traditional examination in different śāstras. He is, furthermore, an external examiner for the PhD graduates in vyākaraṇaśāstra at the Rashtriya Sanskrit Vidyapeetha, Tirupati, and Rashrtiya Samskrit Samsthan, Delhi.

Dr. S.L.P. Anjaneya Sarma is a member of NETamil headed by Dr. Eva Wilden and contributes to comparative studies of Telugu, Sanskrit and Tamil grammars within the Tolkāppiyam team.