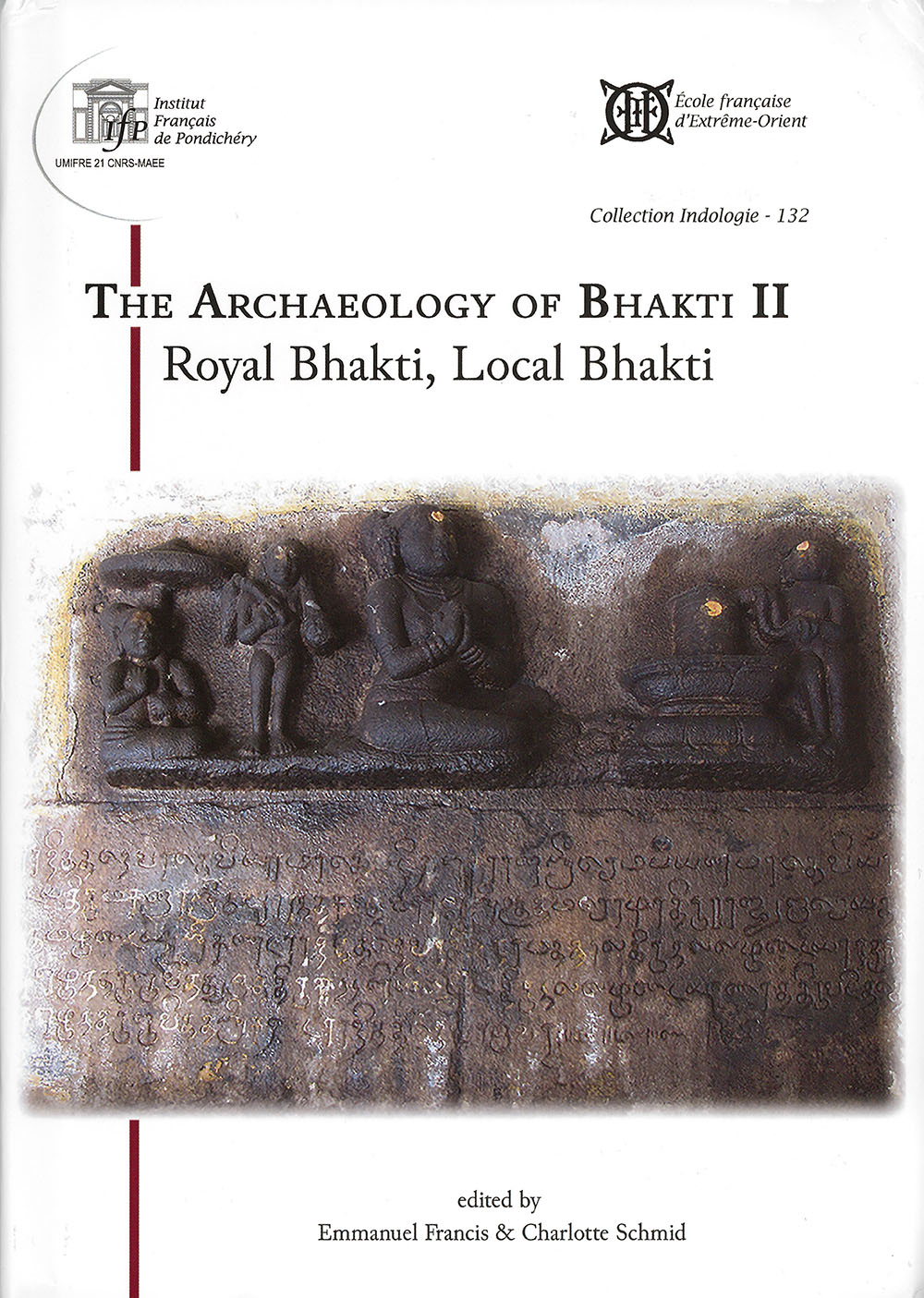 This volume is the fruit of the second workshop-cum-conference on the “Archaeology of Bhakti”, which took place from 31st July to 13th August 2013 in the Pondicherry Centre of the École française d’Extrême-Orient. “Royal Bhakti, Local Bhakti” was the topic of this scholarly encounter and is the central theme of the present volume, which attempts to clarify the roles of kings, local elites and devotional communities in the development of Bhakti.

When we look at the monuments that are the material traces of Bhakti, we expect kings and their immediate relatives to have played a key role in producing them. But temples commissioned by ruling kings are in fact relatively rare: most sacred sites resonate with the voices of many different patrons responsible for commissioning the buildings or supporting the worship conducted there. Queens, princes, palace women, courtiers, local elites, Brahmin assemblies, merchant communities, and local individuals all contributed to the dynamism of Bhakti.

Far from downplaying the importance of kings as patrons, this volume explores the interactions between these different agents. Do they represent independent and separate streams of Bhakti? Or is there a continuum from large-scale royal temples to locally designed ones? What is the royal share in the development of a Bhakti deeply rooted in a specific place? And what is the local one? How did each respond to the other? Was the patronage by members of royal courts, especially women, of the same nature as that of ruling kings?

After an introduction by the editors, fifteen scholars address such issues by examining the textual foundations of Bhakti, the use of Bhakti by royal figures, the roles of artists and performers, the mediation of queens between the royal and local spheres, and the power of sacred places. The volume concludes with an afterword by Richard H. Davis.

* Tīrthas, Temples, Āśramas and Royal Courts: Towards a Mahābhārata Ethnography of Early Bhakti by Alf Hiltebeitel
* Bloß Glaube? Understanding Academic Constructions of Bhakti in the Past Century by Vishwa Adluri & Joydeep Bagchee
* Devotional Elements in the Sakkapañhasutta of the Dīghanikāya
by Greg Bailey

* Word-Image Tango: Telling Stories with Words and Sculptures at the Kailāsanātha Temple Complex in Kāñcīpuram by Padma Kaimal
* Creating Royalty: Identity-Making and Devotional Images of the Woḍeyars of Mysore by Caleb Simmons
* The Servitude of the Travancore Royal Family to Śrīpadmanābhasvāmin by S.A.S. Sarma

* Royal and Local Patronage of Bhakti Cult: The Case of Temple and Court Dancers by Tiziana Leucci
* Hagiography Versus History: The Tamil Pāṇar in Bhakti-Oriented Hagiographic Texts and Inscriptions by Sudalaimuthu Palaniappan

The Power of Place

* Local Bhakti or Monastic Advertising? The Functions of Medieval Jain Rock-Reliefs in Tamil Nadu by Lisa Owen
* Gods and Devotees in Medieval Tiruttaṇi by Valérie Gillet
* Found in Paratexts: Murukaṉ’s Places in Manuscripts of the Tirumurukāṟṟuppaṭai, by Emmanuel Francis
* Where are the Kings? Sites of Birth and Death of Campantar
by Uthaya Veluppillai

Archaeology of the Indian world

The scientific life of Charlotte Schmid is marked by her stays in India: two years in North India (1991-1993) were followed by an assignment, in September 1999, in the centre of Pondicherry (EFEO), Tamil Nadu, for four years. These two periods of intensive work in India articulate a research led between two spaces of field-work, the North and the South of the subcontinent.

After an attempt to define a colonial culture, the Bactrian Greece, based on the material from Aï Khanum -the most important Greek colony excavated in Central Asia- and classical studies (Greek, Latin, École du Louvre), the discovery of Sanskrit and the reading of La grande route de Bactres à Taxila of Alfred Foucher, pointed to the necessity of field-work.

Firstly, following the road of India to an accessible country, which allows studying the relationships between two types of corpus, texts and archaeological material taken in a broad sense, Charlotte Schmid worked on the first known figures of a major Hindu deity of bhakti, Kṛṣṇa in Mathurā. Today an Indian city of medium size of which Kṛṣṇa-devoted cults have forged cultural identity, Mathurā, with its mosque of the 17th c. and its numerous Jain, Buddhist and Brahmanical remains dated from the 2d c. BC, is loaded with myth. A doctoral thesis supervised by Gérard Fussman and focusing on a confrontation between the archaeological evidence and the texts which made of Kṛṣṇa “the” child of Mathurā, was followed by a research on the iconography and the epigraphy of the Gupta period, as it is accounted for in Le don de voir.

Secondly, the posting in Pondicherry led C. Schmid to study the appearance of the deities of bhakti in the Tamil country. The issue of the relationship between texts and archaeology is conducted in "another" region and on better documented periods of time. The EFEO centre gave access to new fields of research. The work with traditional pundits was not the least of them and C. Schmid started to also investigate Tamil data.

Posted in Paris since 2003, she pursues researches on the figures of Hinduism in Ancient India, fed by lively exchanges with the Indian scholars of the Centre of Pondichéry and by archaeological material (monuments, sculptures, inscriptions). Temples in situ, provided with dozens of inscriptions and sculptures, established between the 6th and the 12th c., as well as the texts, often devotional, connected to them, constitute the basis of, for instance, Sur le chemin de Kṛṣṇa : la flûte et ses voies and La Bhakti d’une reine.

Her seminars at the École pratique des hautes études, her role as editor in chief of Arts Asiatiques and member of the editorial board of the Bulletin de l’École française d’Extrême-Orient, her involvement in the Corpus des Inscriptions Khmères (CIK) provide opportunity for many exchanges with students and colleagues, which, finally, made of Southeast Asia one horizon of the work of C. Schmid.