Critical editions of the Caṅkam corpus, that is to say, editions that are based on the whole range of available evidence, that lay open their sources and that discuss the rationale of their choices, have so far never been attempted. Given the rate at which the surviving manuscripts are now deteriorating, in spite of general attempts at preservation, and bearing in mind that the practice of copying manuscripts has now more or less ceased, an editing endeavour such as is intended with this series will soon no longer be possible. This series of co-publications, undertaken by the Pondicherry Centre of the École française d'Extrême-Orient, (EFEO, French School of Asian Studies) and the Tamilmann Pathippagam, aims at furnishing critical editions prepared by an international team of scholars. Its first outcome was the Naṟṟiṇai, published in 2008. Each edition will contain a full critical apparatus, an annotated English translation that strives not for beauty but for clarity, and a complete glossary with morphological analysis and translation, as well as a number of special indexes pertaining to Indo-Aryan loanwords, complex verb-forms, sources of quotations and the like. 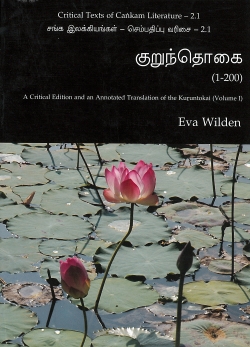